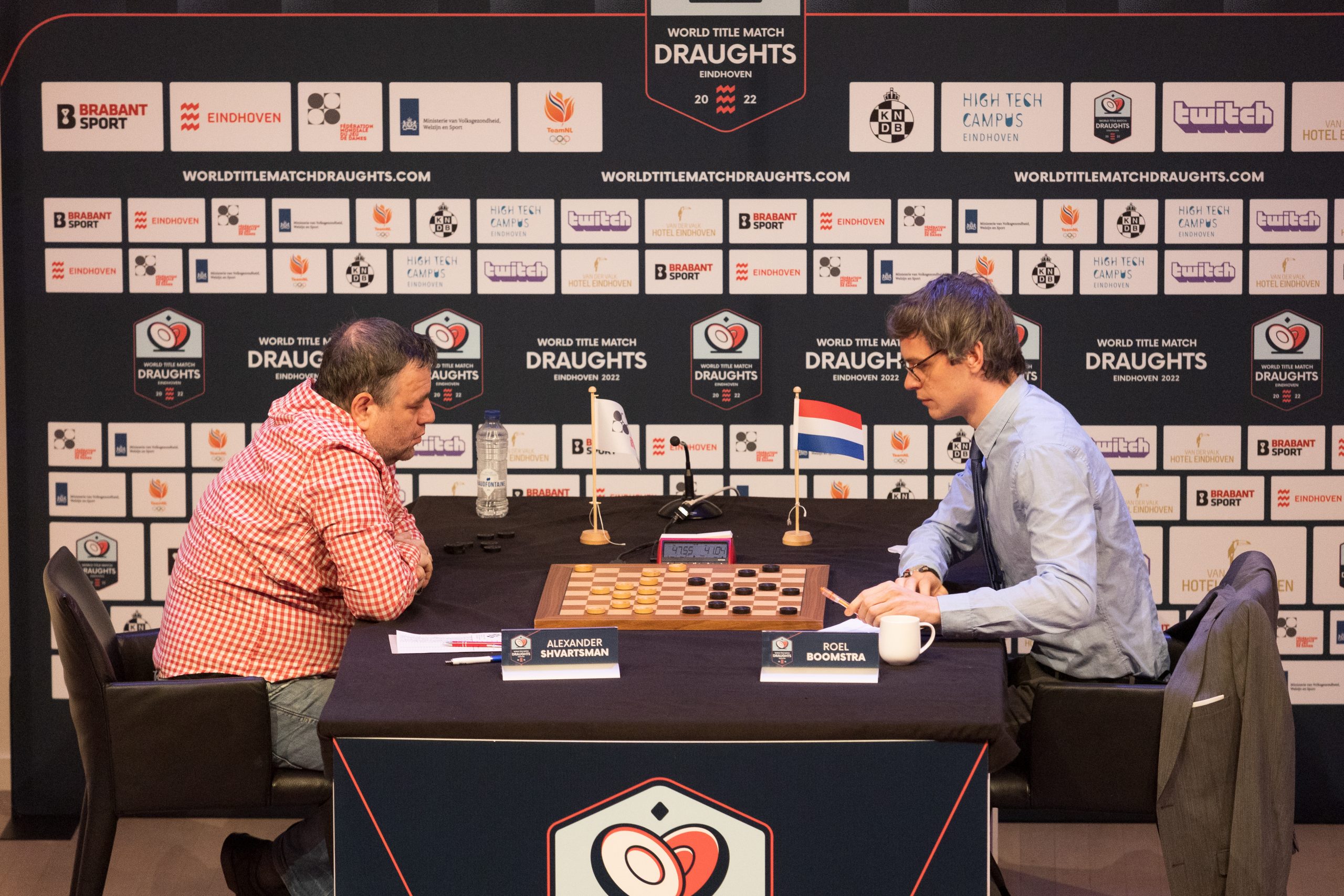 Boomstra and Shvartsman are on the eve of all-decisive tiebreak.

Today Roel Boomstra and Alexander Shvartsman competed for the world title for the last time in a regular match. Playday 12 began with the same opening as when Roel won in 2019. Already on move 4 the Dutchman decided to deviate. His choice resulted in an interesting continuation of the game. Shvartsman could namely play on the center, while Boomstra wanted to counter this via the edge. The Russian grandmaster decided to only attack under very favorable conditions. His opponent, however, did not grant him the momentum.

The moment the Muscovite chose to attack, Roel Boomstra could immediately exchange it by means of a sacrifice. What ensued was a game situation referred to as ‘edge piece against a fork’. Alexander Shvartsman tried to take advantage of the edge by forming a strong center. But via an active exchange to the center, Boomstra threw a spanner in the works.

When a dynamic balance emerged in the position that required both players to proceed cautiously, a draw became virtually unavoidable. A wrong move at the wrong time would result in a disadvantage. Both players, with the tiebreak in mind, were not willing to take unnecessary risks. The last regular playing day ended in an equal draw. This puts us on the eve of the very last matchday, which immediately provided a good moment for Shvartsman to look back on the course of the tournament: “I am almost completely satisfied. Apart from my big mistake on game day 8, I played well.

Tomorrow the lightning-fast tiebreak will start, the all-important moment that draughts fans around the world have been looking forward to. It will bring an inevitable decision in the battle for the world title. With two victories already under his belt, Roel Boomstra is on course to win his third world title. This means that any victory on his part will be immediately decisive, while Alexander Shvartsman faces the challenge of getting three victories to his name. “The chance is not great, but you never know,” the Russian stated. As long as Boomstra does not take a victory, the duel will continue until the absolute end. It will start with three Rapid games, if there is no decision there will be three Blitz games and if the title fight is still not decided then the Superblitz will follow.