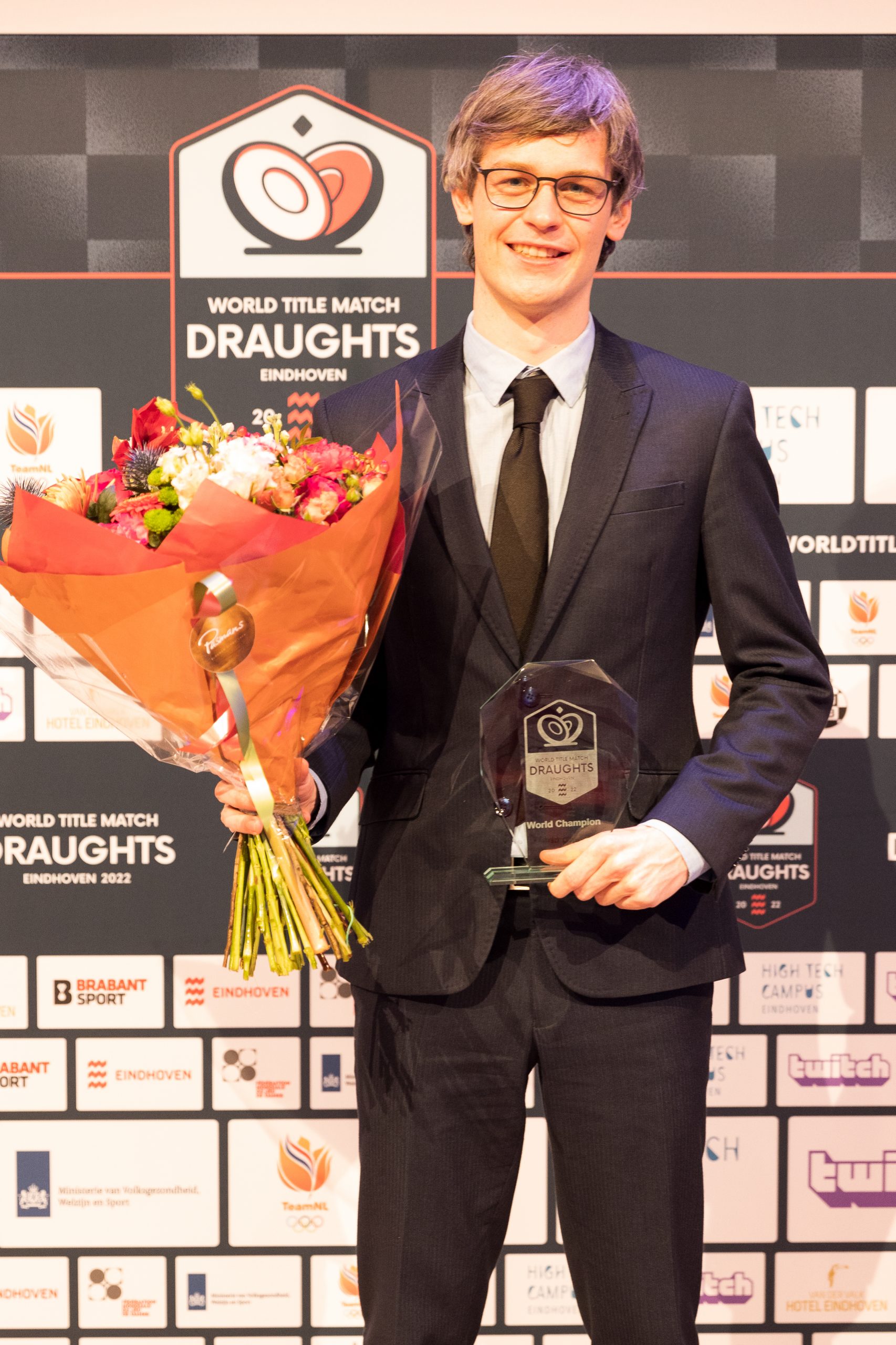 The first Dutch world champion of this calendar year is known: Roel Boomstra captured the World Title Draughts today at the High Tech Campus in Eindhoven. He did this for the third time, thus taking over the baton from five-time world champion Alexander Shvartsman.

With a 2-0 lead Roel Boomstra entered the tiebreak today, a lightning-fast battle in which the time to think is getting shorter and shorter. The first rapid game immediately provided spectacle; in the middle game Shvartsman played a very surprising 30.35-30. With this he forced a settlement with a king for three pieces. However, it was unclear who exactly had the advantage and eventually Shvartsman decided to play for a draw. In the second rapid game Roel had a slight advantage, but again Alexander Shvartsman forced a draw, this time by a coup fabre.

Dutch sport has many tactically decisive moments that are etched in our memories. Roel Boomstra’s lunch break after the second rapid game is one such moment. “In the lunch break I had prepared a move together with my team. When I then played this move, Shvartsman had to think for 10 minutes afterwards”, he says. This tactical masterstroke resulted in the game in which the Dutchman is at his best. Roel got an offensive game in the center and showed how strong he is. His attacks became more powerful with each move. Shvartsman tried with all his might to defend his world title to the bitter end. The Russian placed a number of vicious traps, but there was no stopping him. Roel Boomstra pressed on, won for the third time in the tournament and thus captured his third world title.

“I am very satisfied. I played even better than last time, the same goes for Alexander. I did it and I’m very happy!” said the brand new world champion during the award ceremony. At that moment Shvartsman had to officially relinquish his world title, but be behaved very sportsmanlike: “It is not difficult to beat Roel. It is even more than difficult. I did my best and I don’t regret participating in this tournament.”

When Roel has recovered a bit from all the impressions, he takes the time to look back on a for him legendary World Championship: “In a match there are many moments. It started in game 3 in which I had a hard time, but came through. The first important moment was of course the tiebreak in which I got my first victory. The tiebreak lasted very long, so it was a moment that had a lot of impact. And then of course matchday 8, when it became 2-0 and I was already very close to the world title.” The Dutchman is therefore proud of the performance he has achieved and repeatedly emphasizes that he has been supported through thick and thin by his team. “I think this is the highest level I have ever reached. I was in perfect form and could not have played better than this.” With a third world title in his pocket, it is now time for Roel to go home again. What will he do when the time comes? “I am getting a haircut,” the world champion says with a laugh.